I just love taking photos... Got a new snapper (Camera) so, I'm button pressing at whatever. My cat tigger is getting fed up with me snapping her (I can tell) this is the latest pic... Looks like she 's asking "What now?" 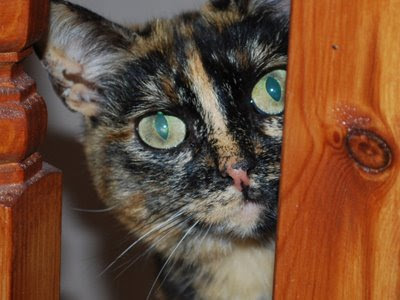 Saturday has arrived so I thought as the weather forecast was for heavy rain hill walking was out. As I wanted to get some exercise in and still have plenty of time left to enjoy the day I thought I'd get up early and go swimming. (Seeing I had a few last night) Up at 6 ish, looked out the window and it looked nice but damp. Got showered and dressed and on the cycle by 7am. It was amazing how many people haven't even made it home from their Friday night out. On the way into town going past the old cricket ground, there were trainee thugs still drinking and making merry (I decided to pedal faster in case they wanted to include me in their merriment) and cycling up Royal Avenue there were bodies lying on city benches with their empty carryouts close by.. (Ah, those were the day's).....
Posted by Grumpy Head at 09:30 No comments:

Way to go.. Photos, then name and shame. Here is a link to a BBC News website page, http://news.bbc.co.uk/1/hi/northern_ireland/8097911.stm the PSNI have appealed for the names of persons (Morons) they want to talk to in relation to riots in the so called Holyland. 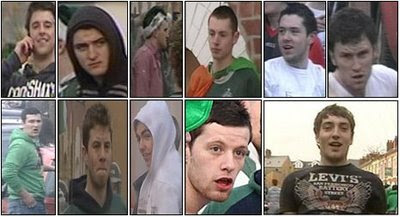 Please visit the link http://news.bbc.co.uk/1/hi/northern_ireland/8097911.stm and read the story.
If you recognise anyone in the photograph (Some butes I have to say) get on the blower to the PSNI..... Could be wrong, but it may do the Police some good if they look around Queens..... As I said, I could be wrong though!
Posted by Grumpy Head at 20:12 No comments:

Three men married wives from different countries.
The first man married a woman from Italy . He told her that she was to do the dishes and house cleaning. It took a couple of days, but on the third day, he came home to see a clean house and dishes washed and put away.
The second man married a woman from Sweden . He gave his wife orders that she was to do all the cleaning, dishes and the cooking. The first day he didn't see any results, but the next day he saw it was better. By the third day, he saw his house was clean, the dishes were done and there was a huge dinner on the table.
The third man married a girl from NORN IRELAND . He ordered her to keep the house cleaned, dishes washed, lawn mowed, laundry washed, and hot meals on the table for every meal.

Nice Car Shame About The Blonde

Could not believe it (OK I do) I was walking through town tonight during the evening rush hour when I spotted this blonde texting while driving at a main intersection in the city centre, and she continued to text while she drove and negotiated a right hand turn at traffic lights. What a bimbo..... Nice car though 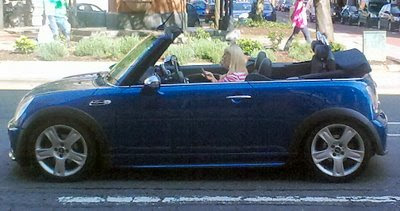 anyway) but I'm still alive (@ the moment) in case you wondered where I was. With all the good weather lately I've been out and about, and last week I ventured up to Belfast Zoo (Don't entirely agree with zoo's but went anyway) It has been years since I've went and the first thing I saw was the whole new entrance, looks pretty well may I say. After entry I saw the old Floral Hall... Looking at it, it was hard to imagine the place use to be a dance hall before it was used as an animal shelter...(Although knowing some

of the clampets who use to go there, it may have been one from the very start)
The place is so far up the hill I'm sure people were done out before they even got their first dance or their 99.... There must have been an ice cream van parked outside? as I heard my brothers say a few times that when they got to the Floral Hall "It used to be, get the girl, go twice around the dance floor, then outside for a poke" (I was too young to go, so I wouldn't know)

What I did laugh at was a sign in the car park saying "Please remember where you park" Really ?... It is worth a visit I have to say.. Oh yes! there are some beautiful animals there...
Posted by Grumpy Head at 18:31 No comments: 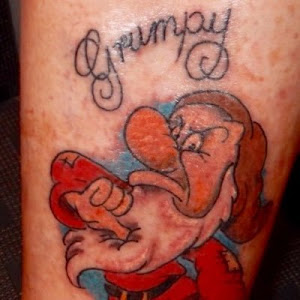